Joes & Cos Co-founder William Restrepo: “I’m on a mission to build the future of work” 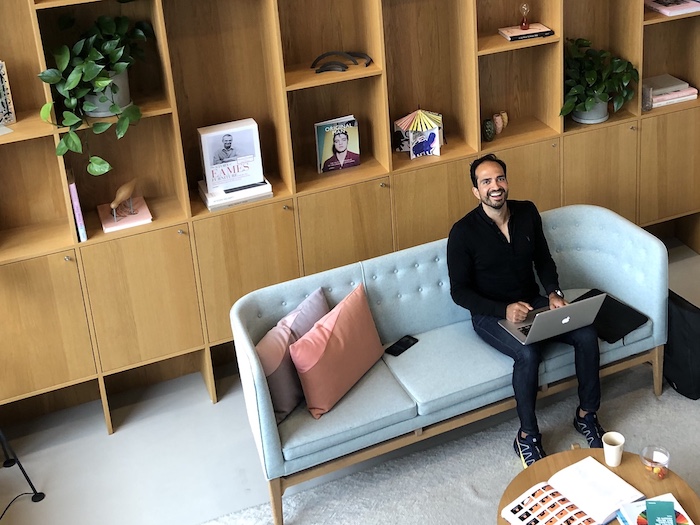 “Just imagine it. You land in Berlin, you pull out your phone, launch the Joes & Cos app, and you’re served with a complete overview of where to be productive around the city.” William’s eyes light up as he’s sharing the ultimate mission for his latest co-founded venture, Joes & Cos, the Danish app and platform that offers spaces to be productive. All the way from the US, William is on a mission to create the future of work. What brought him to Denmark and led him to co-found Joes & Cos?

William Restrepo was born in the US and raised in Texas by Colombian parents. “When I was 18, I moved to Dallas to study. I ended up with a business degree with a financial focus and also studied philosophy and psychology for a well-rounded education. I’ve always been curious about how people think and the why,” William explains. 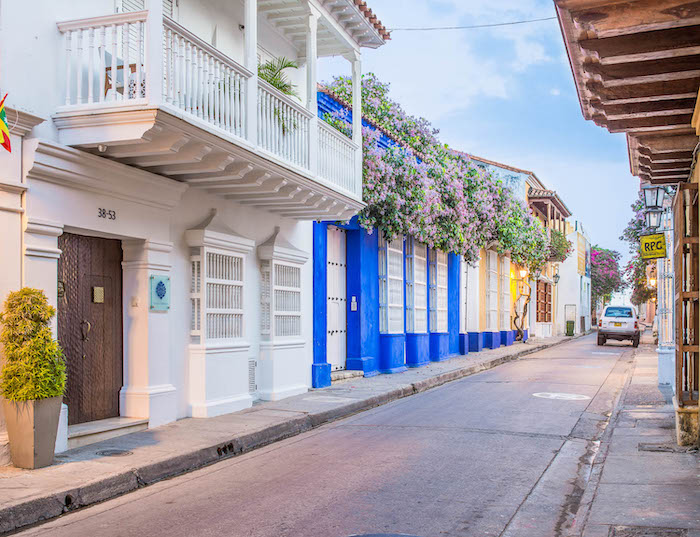 The street where William’s hotel in Cartagena, Colombia, is located

After finishing his degree, William founded his first company and had his first flirt with entrepreneurship: “I created a lifestyle bottled water product and built the company from scratch. Doing this taught me more than going to school did, and the experience truly crafted who I am,” William says.

After this entrepreneurial gig, William was hungry for more. His family had a historical house in the middle of the landmarked Colombian city of Cartagena, a UNESCO World Heritage site. The family wasn’t quite sure what to do with the house. William immediately pitched himself to his family; he would open a boutique hotel and would run it, too. He was confident that he could own up to the role of a boutique hotel founder and manager.

Shortly after, with the help of an interior designer, a graphic design team, and his hotel staff, the boutique hotel with seven rooms became a reality. William would travel back and forth between the US and Colombia, opening his eyes to the world of being able to work from anywhere in the world.

“When I come to think about it, I’ve never been employed. I’ve learned that the greatest level of fulfillment and excitement comes from being able to be in charge of my own life,” William says. 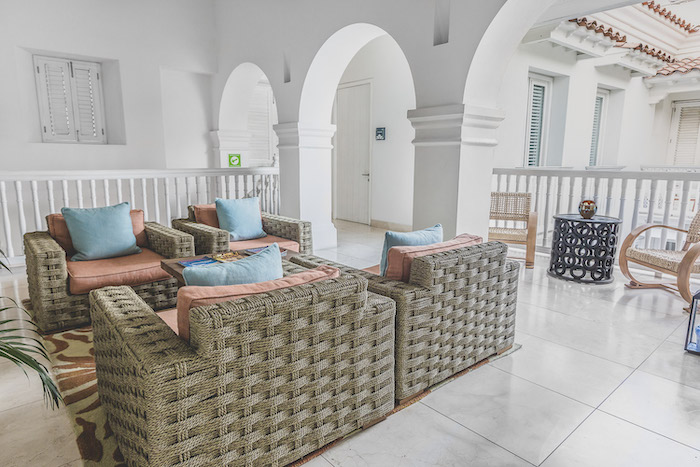 From a boutique hotel in Colombia to an app in Denmark

But how did William, a Colombian-American hotel owner end up in Copenhagen? “I reached a point where I was unhappy in my setting. I didn’t feel fulfilled in the US after having lived in Colombia. In 2017, my curious spirit led me to Copenhagen, and I began my MBA studies at the Copenhagen Business School. It was the happiest thing because I knew my life would change for the better. I fell in love with the culture, and it was new to me that people walk and bike to get around, how amazing!” William explains.

Moving to a brand new country also meant that William needed to re-establish himself. “I had a strong desire to stay in Denmark; I was truly immersing myself in the culture, by learning Danish and exploring all the Danish events I was invited to. No country is perfect, but for me, Denmark is as close as it gets. I love the Danes’ ability to make the best out of a not so great situation. It’s raining? Put on a raincoat and go on your bike. It’s cold and dark outside? Hygge is the answer,” William laughs.

After finishing the MBA, it was time to figure out the next step. That’s when William met Simon when the corona lockdown had just happened. 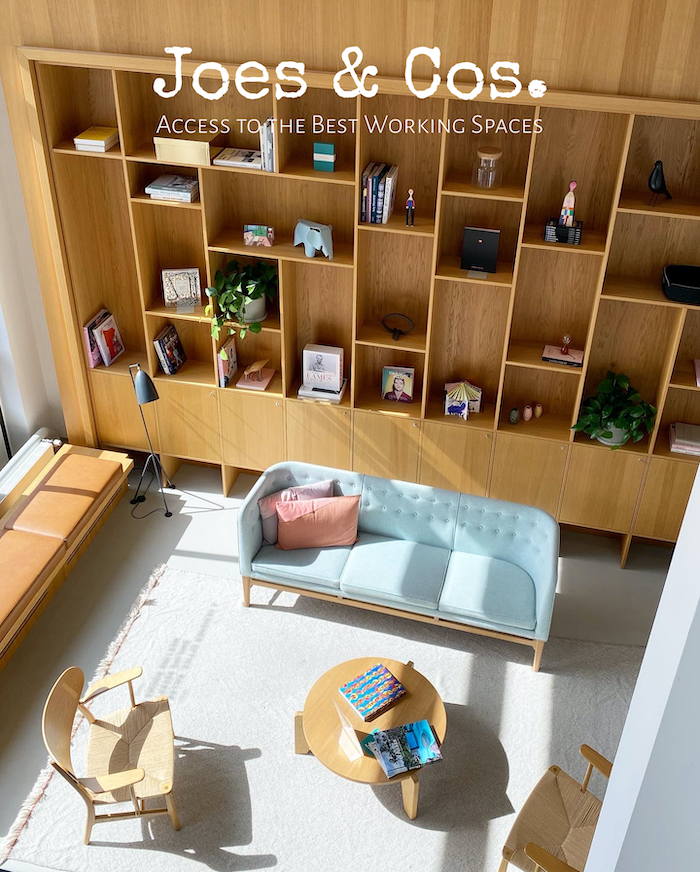 Spaces in Carlsberg Byen, Copenhagen, which is part of Joes & Cos

Questioning the norms and the way we work

“Simon and I are a match made in heaven. Our shared values but different perspectives create a beautiful partnership, and it didn’t take long for us to decide that I should hop on board the Joes & Cos train, as the motivation and vision of the app truly resonated with me,” William explains.

After living in multiple countries, realizing that all he needed was a stable wifi connection and a laptop in order to work, William felt ready to build and accelerate the future of work by questioning the norms and the traditional way we work advocating for a different work experience; corona only helped with the acceleration.

“I’m a firm believer in promoting independence and trust between the employer and the employee. If you give trust to your employees and they feel comfortable about the way they work, within a flexible form that fits their schedule, they will perform. Offering a platform where all sorts of professionals, from employees to freelancers and entrepreneurs, get a chance to choose how they would like to work is appealing to me,” William explains about co-founding Joes & Cos.

The ultimate goal of Joes & Cos is to give people access to spaces where they feel comfortable and productive. When people are comfortable, that’s when they are productive.

“My idea is that Joes & Cos can offer a vast range of different working experiences. One day, you feel inspired and want to go to a classy hotel such as the Villa Hotel to get work done. Another day, you may have a phone meeting and need a private phone booth, so you head over to Spaces. The ability to create a level of independence and choose your work experience based on your workflow and mood is crucial and what we want to give to people,” he continues.

Work can (and should) be fun

The dictionary defines “work” as the opposite of play. Joes & Cos is on a mission to change that definition. That change is based on the belief that if you get to be in charge of your own life, matching it to your needs and mood, work will feel fun and give you a sense of fulfillment.

“With the corona crisis, people have been forced to be introspective. It’s like a societal, global reset that leads people to prioritize values and think about why we do things the way we do. It takes a hit on cultural norms. Now is the time to change. Even employers have begun to realize that the traditional office space and way of working isn’t necessarily the best way. Corona proved that working from home has led to higher productivity numbers,” William says.

He continues: “We are not made to sit in a chair and focus for 8 hours. So why are we doing it? The idea of flexible working has gotten stronger, more and more are people realizing it. Now it’s not just for the lucky few, but something that big companies are adapting to. The seeds for the future of work have been set, and I can’t wait to help them grow.”

We hope you enjoyed this blog post. Joes & Cos is the platform that grants you access to working spaces around Copenhagen to let you work wherever you want, however you want. The app brings you the future of work and lets you create your own work/life balance. Read more here or download the app here.